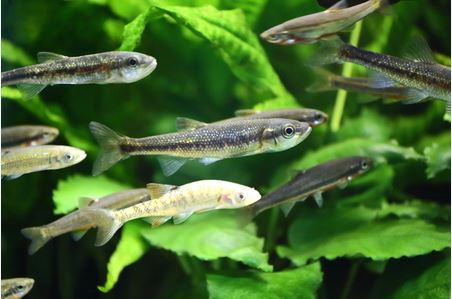 Trivia time: what was the name of the charter boat that did a fictional “three-hour tour” that ended up getting shipwrecked and leading to comedy gold in the form of the 1960s TV comedy, Gilligan’s Island? If you guessed the “SS Minnow,” you’re right!

For many people, that TV show was the first time they heard the word “minnow,” unless they had a dad or relative who liked fishing. In the fishing world, minnows are well known as bait fish used to catch other fish. Sometimes kids keep minnows as pets in aquariums.

An Overview of Minnows

Minnows are relatively small in size (up to 2 inches in length), have a high tolerance for variable water qualities, and are found in freshwater. You’re likely to find minnows in the wild in streams, rivers and lakes, while most fishermen just go to bait shops to get them. It is easier to get them at stores than to capture them in the wild. By the way, if a fisherman wants to try and catch them, he or she is apt to use a mesh net to do so. Luckily, they can often be found by shore or just off docks.

What can you do if you don’t live near a body of water with minnows in it, or you want to acquire a whole bunch of them at once? Consider a visit to Kenneth Henneke Fish Hatchery for minnows.

In Texas, minnows are bait fish used to lure and catch freshwater sport fish such as bass and crappie. Furthermore, say you’ve got a pond on your property, and you want to add minnows to the mix… you can get them at Henneke Hatchery.

Minnows are hardy, resilient fish– they don’t require much to survive and thrive. Delicate they are not, as Yoda might say. There are several different types of minnows, including fatheads, which live near the bottom of the water, and sheepsheads, who live in really shallow waters where you won’t easily find any other fish. Like rabbits, minnows are known to “be fruitful and multiply.” They’ll spawn quickly and produce large numbers.

Need minnows for bait or to stock your pond/lake in Texas? Please call Henneke Hatchery at 361-798-5934 or email info@hennekehatchery.com.

← What is Electrofishing?
Interesting Facts About Bluegill Sunfish →