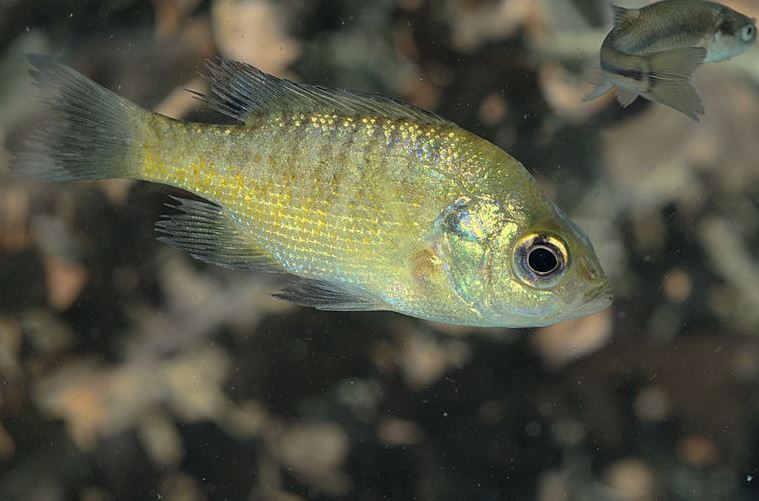 For many youngsters, the first fish they catch ends up being a Bluegill sunfish. These fish bite year round, are ubiquitous, and help kids get “hooked” on the sport of fishing.

An Overview of Bluegill Sunfish

As a freshwater fish, Bluegill sunfish are quite common all over North America in ponds, rivers and more. Measuring about 6 inches in length, and sometimes getting up to a foot long, they typically weigh less than a pound. With a dark green body and some dark bars running vertically down their sides, female Bluegills have a yellow belly and males have a red belly. Spawning season starts in May and runs through August.

Now this is interesting: males arrive at the spawning site first. They prepare a spawning bed in shallow water. Females approach the nest, and want to hook up with the biggest males. It’s like a high school dance, really, and eventually fish pair off, “touch bellies,” and spawn. A female will drop her eggs. By the way, did you know a female Bluegill can lay between 10,000 and 60,000 eggs– mind-boggling, right? The male then chases her away from the nest and decides to guard those eggs. Males guard the eggs ‘til they hatch– a process which typically takes about 5 days. Once they can swim on their own, the kids leave the nest and live their lives. Bluegills become sexually mature at 1-years-old, and can live between 5 and 8 years.

If you were to take a look in a pond for Bluegills, you’d likely see them swimming in schools of 10 or 20 fish, group-wise. These little fish are good swimmers and can change directions very quickly. The largest ever caught weighed 4 pounds, 12 ounces– this was back in 1950. Since they’re relatively small, it’s no wonder, then, that they’re often used as bait fish.

If you’re trying to catch Bluegill for fun, the most common bait to get ‘em is worms. That said, they’ll also bite at bread, minnows, small jigs, and bugs. Use a small hook, since Bluegills have small mouths.

Henneke Hatchery can supply Bluegill sunfish for your ponds, lakes and other areas. Please call 361-798-5934 for more information.